The Palace of Counts Potockis is a majestic edifice in French Neorenaissance style of late 19th century.

Behind the fence with ornamental metal gate we see a majestic yet refined structure. The imposing palace is decorated with reliefs, mouldings, murals and stained-glass windows. The Palace of Potockis is a bright example of mature historicism architecture and one of the most interesting architectural landmarks of Lviv. It was designed by French architect Louis d’Overnu at the order of governor of Halychyna and Lodomeria Count Alfred II Joseph Potocki (1817-1889). The construction lasted from 1888 to 1890 under the supervision of Lviv architect Julian Tsybulski who also introduced some minor changes.

The style of King Louis XVI is predominant in the interiors of the palace’s first floor. The halls (the Red Hall, the Mirror Hall, the Blue Hall, and the Ordinat’s Office) are decorated with artificial marble, gilding, mouldings, and mirrors. Fireplaces cut from marble are adorned with gilded bronze.

There is a chapel with the miracle-working icon of Virgin Mary of Lviv (15th century) on the first floor. The second floor is occupied by the exposition of Lviv Art Gallery, opened by Ancient Arts Hall. European art of 14th-18th centuries is represented by the best works from the Gallery’s collection: a 15th-century Ukrainian icon of St. Paraskeva, paintings by M. Basaiti, J. Zucchi, S. Ricci, J.-E. Lyotard, J. Guerin, and F. Goya. The palace often hosts conferences, presentations, chamber concerts, and political meetings. 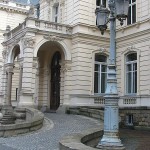 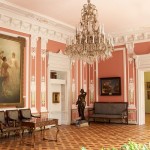 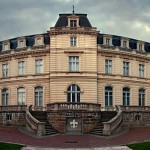 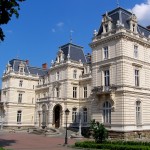