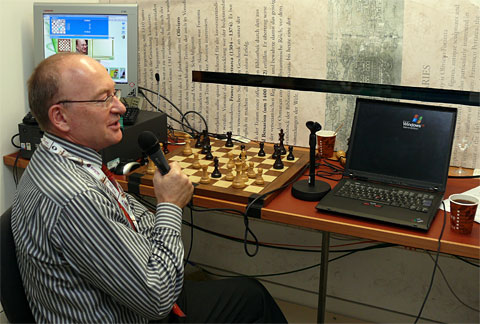 You are a countrymen with current Women’s World Champion Maria Muzychuk and her sister Anna and you know both sisters very well. How can you evaluate Maria’s success in Sochi? Could you expect such a great result?

Of course, nobody expected it! The sisters’ trainer, famous GM Alexander Beliavsky told me, that before the Championship he could not train Maria, as she was terribly sick. Maria was not the main target for Alexander as he was training Anna mainly and Maria was like an additional person during their trainings! But it was something like Diego Maradona’s “Hand of God”!

So now the Women’s World Championship Match will take place in Lviv. How important is it for Ukraine?

I think it is extremely important event in the current political situation. There are first signs which shows that chess is becoming more popular in Lviv. From September 2015 the chess lessons will start in every school! We hope that chess players will get back their chess club, which was closed 10 years ago. Nowadays we have more than 20 Grandmasters in Lviv, but there is no place to hold training sessions! FIDE President Kirsan Ilyumzhinov supports this process very much.

Do you have any estimation about the possible outcome of the Women’s World Championship Match? How can you describe both players and their advantages and disadvantages?

Maria is called Miss Tactics, like young Mikhail Tal, and Hou Yifan is incredibly mature chess player. I would say that she is like young Boris Spassky, an incredibly universal player. So everybody has to try to take her opponent to her own territory.

They are both very young and can improve considerably. Maria’s trainer Alexander Beliavsky told her: “You’ll be the real World Champion just when you’ll win the match! For Maria this period of preparation for the match is crucial – she can become the great player, but she needs really to work hard, especially to study a lot of classics. Her situation reminds me the period when Tal won the match against Botvinnik at the age of 23. He was describing his feelings and said: “My head is full of sun.” The same applies to Maria at the moment – she is on heaven. So, she must go down and start to work hard. Otherwise it can be over like it happened to Tal in his second match against Botvinnik.

What kind of scenario of the Match will be interesting for you?

Yuriy Razuvaev, the coach of Alexandra Kosteniuk, who made her a World Champion, said that the most difficult work was to be a women coach because there is a lot of psychology. The most important task for women’s coach is to prepare a women player so well that she feels confident about her preparation. If a women chess player is sure that she knows everything in the opening she can defeat anyone. I’ve seen many times when strong GMs, coaches or husbands of women players, were showing them difficult long variations which the poor girls were trying to learn before the game but unsuccessfully. I want to tell to all of them: “What are you doing?” It’s not the way if you really want to help women players before the game. You have to show her first moves, plans, different possibilities which can happened in the game and warn her if there are some possible dangerous probabilities. In that case, a woman feels she can control situation because I believe that when they lose control they also lose self-confidence.

Then girls are always well educated and thankful to those who helped them. Unfortunately the attitude can be different when we speak about relations between junior top players and their coaches.

Don’t you think that the will to control the situation during the game doesn’t help women to increase their level in chess?

Women like to control everything in their lives and lives of their relatives (laughing). I don’t think it’s a bad quantity for women, I believe they even have to develop this quantity for chess. We win our game because we do something better than our opponent, we lose it when we do something worse than him. Our strength help us to win, our weaknesses lead us to lost positions.

What else is important in preparation for a woman player who wants to succeed in chess, apart from chess preparation?

Physical training is also a big part of success for the chess player. Sport is a great psychological preparation. Everyone needs to burn extra adrenalin in order to be able to play normally again. But not many girls are doing sports, and it is the reason that their chess abilities are decreasing after 30 years age. Only Alexandra Kosteniuk has regular training, takes part in marathons, jogs after every game! So, she can be an excellent example for other girls.

(the full text of the interview https://www.fide.com/component/content/article/15-chess-news/8956-interview-with-the-chairman-of-fide-trainers-commission-adrian-mikhalchishin.html )